Well, my cat died a little over a year ago. Those of you who don’t have a cat or just hate cats (FYI, you can eat poo) might not get it, but I still miss her every day. When she was alive, I used to carry her around my apartment, stand next to my roommate, and say, “Kitty, you’re my favorite roommate…that has fur.” It was hilarious every time and never got old. Kitty was my best buddy, and seeing her get sick and die was just the worst ever. When we came home from the vet, I wrapped her in tissue paper, put her in a shoebox and buried her out back of my parents’ house under the rose bush. The rose bush had a great year. Me? The jury’s still out. 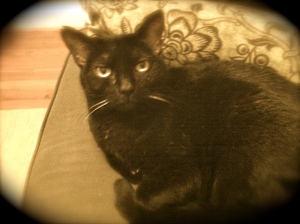 I only mean that a little. Of course I know it’s been an amazing year for me, too (suck it, rose bush). I graduated from college, I made great friends, I was gifted an iPad from a gentleman benefactor. It was just hard to lose Kitty at such a critical moment. She represented more than she knew, which is saying something because she was getting her PhD in tuna. She was home to me. She would always, no mater what, sit on my books when I needed to study, scratch at my laundry basket when I was trying to sleep, and put her little paw on my face when she woke up all snuggly and adorable in the morning before she started shouting for me to give her treats. When she died it was like the universe was telling me, “Ok now, Genny. No turning back now. Go for it.” So I did.

I moved into my Chinatown apartment  on November First. I got a bed delivered that day and settled in for my first night. Around 2 am, I woke up suddenly to the sound of a cat screaming violently. It was so loud, I thought it was in the apartment. More likely it was on the fire escape next to my head. At first, I was annoyed to be woken up. But then, I smiled. It was kind of like this feral pile of mange was welcoming me. Assuring me, “Genny, you got this. First step apartment, next step, job, dreams, life.” Again, more than likely, he was probably saying “Screw you, Rat, this is MY chicken carcass”. Whatever, I am much more sentimental than that rat. 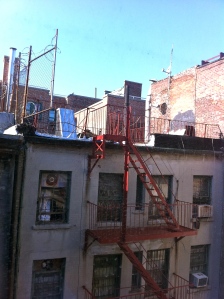 I still hear him from time to time. Never so close as that first night, but he’s out there. Roaming the rooftops, screaming violently, truly and deeply living. Every time I hear him, I think of Kitty, and her blind, tacit support of my every move. I like to think he represents that too. He is Kitty’s successor, saying, “go for it!” I hope he knows that I reciprocate the sentiment completely.  I always hope he’s happy. Though, given the screaming, if I am being realistic, I guess he’s probably not.