My parents just left after spending three weeks here.  It’s fitting that it’s pouring rain today, as it reflects our feeling that these two little rays of sunshine have taken their party and gone home.  Fortunately, they left their hostess gift behind: a BoomBlaster Electronic Fart Machine.

Despite the fact that we squeezed eight people into a four bedroom, two bathroom house, they were ever cheerful.  No problem with the noise, too much shared bathroom information and the general jumble of the household.  These super seniors dressed each day prepared for any possibility of activity, from a museum visit, to lunch, to a stroll around the neighborhood. Cocktail hour?  It’s only 3 o’clock?  Why yes, I’ll have one.  Cashmere sweaters: on. Hip jewelry: of course. Full head of styled hair: in place. Dad looked like the Mayor of Palm Springs and Mom channeled the owner of a modern art gallery.

While they were here, Mom knit a complete sweater for herself, while watching a LOT of Real Housewives. Dad, (if he wasn’t golfing with the boys), spent the day reading the paper in the sun by the pool.  He perfected READING the paper.  He had to be ready for dinner conversation with the latest updates in the world, especially the weather. Lots about the weather…everywhere. They both did a bunch of shelf organization. We can’t find anything anymore, but it really looks sharp. They also spent some time plotting the evening victim of the fart machine.  The best one was when they taped it under my husband’s chair. That made for some dazzling dinner conversation.  By the time they left they still hadn’t figured out how to turn on the T.V., and never did manage to answer their cell phones on the first attempt, but by God, they had that fart machine down to a science.

Family dinners were an event, with candles lit and lots of wine.  Conversation was lively, which really means loud, as they are kind of old.  Mom thinks an eye lift would be kind of fun, my Dad can’t understand the “hooligans” of  Occupy Wall Street.  They had lots of opinions about everything; they were rarely asked for, but freely given, often.  Gingrich was a fun target, especially that account at Tiffany’s, and his wife Callista.  We heard about their schedule at home:  coffee group, neighborhood martini parties, wine Fridays, golfing, skiing at 78, because he’s waited a hell of a long time for it to be free, funerals, their part-time jobs, driving three hours to have brunch with friends from 1962.  Apparently, just about any Wednesday is an excuse for a gathering…even the summer solstice is a night out.

Mom and Dad are the kind of people who give you a trophy for just being you.  They tell you that you look great…every day!  They think you do a good job… on everything!  They think you’re the best…all the time!  They seem to marvel at a lot of little stuff that is easy to overlook.  They’re still really excited to see what’s going to happen next, for their family and especially, what’s on the next episode of Masterpiece Theater.  They’re really just a good time, all the time.

Now that they’re gone, the house doesn’t have the same kind of perky atmosphere.  I guess we’re back to the usual, which means Ben doesn’t have to fake being charming anymore and we don’t have as much of an excuse to open the wine on a Tuesday.  The fart machine has been put away.

We hope to get them back here for another visit, I’m waiting for them to let me know when they can fit us in… 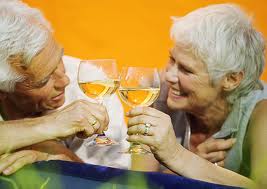